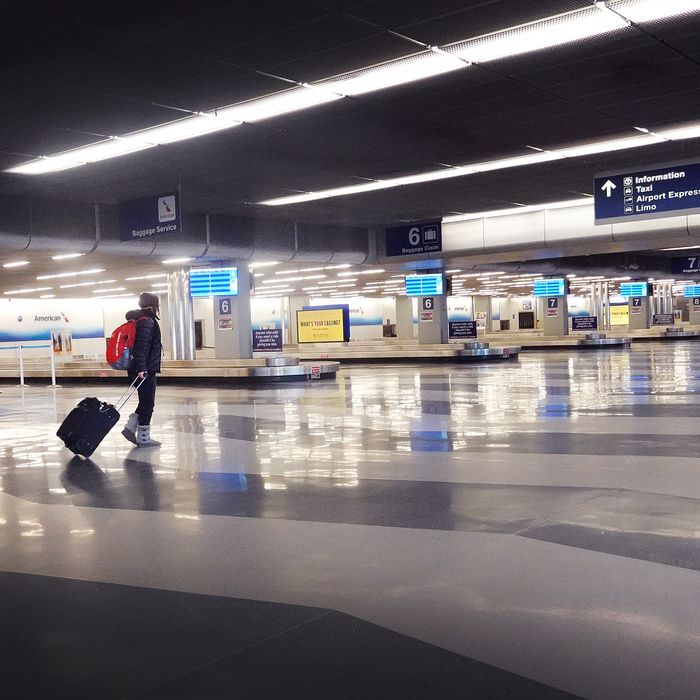 A traveler arrives at a nearly deserted O’Hare International Airport on April 2 in Chicago. The airport, which typically serves 8.2 million passengers a month, has closed two of its seven runways as the COVID-19 pandemic has significantly reduced air travel.
Photo: Scott Olson/Getty Images

You have probably seen the video of an American Airlines flight attendant making the best of a difficult situation on March 27, providing a customized inflight safety briefing for Sheryl, the sole passenger on a flight from Washington Reagan National Airport to Boston. Sheryl was on the way to visit her dying mother and the American crew did the best they could to cheer her up in a way she really appreciated.

As travel blogger Gary Leff has noted, flying alone on a commercial airliner is usually a once-in-a-lifetime hoot for a frequent traveler, but now it’s becoming a much more frequent and grim occurrence. While the airlines have drastically cut their schedules, those service cuts haven’t nearly kept up with the drop in demand, which is why lots of flights are going nearly empty. Airline industry reporter Jon Ostrower wrote on March 31 in his trade publication The Air Current that two U.S. airlines were reporting load factors — the percentage of seats filled — in single-digits in recent prior days, the period when Sheryl was flying. (Under normal circumstances, load factors are closer to 80 percent.) All those near-empty flights mean a lot more pilots and flight attendants and airport workers are showing up to jobs and interacting with each other than would be necessary if the flight schedules were reduced even further.

Consider, for example, that Washington to Boston route. Even at a drastically reduced schedule, airlines are supposed to operate 13 nonstop flights this Wednesday from the Washington area’s three major airports to Boston Logan — roughly, one flight an hour throughout the day. Some of these flights are set to operate nearly empty: Wednesday’s 8:30 a.m. United Airlines flight from Washington Dulles to Boston, operated by an Airbus A320, shows just ten seats assigned as of late Tuesday afternoon; American’s 7:30 p.m. flight from National showed just seven assigned seats.

One reason to keep so many flights going is to help the airlines implement their policies that promote social distancing. Obviously, while you don’t want flights with just one passenger, you also don’t want to be packing customers onto full or nearly full planes. American has been blocking many of the middle seats on its flights from booking to create empty seats between passengers. It’s also preventing people from booking the seats closest to flight attendants’ jump seats, and it’s allowing passengers to move away from their assigned seats to get farther from fellow passengers. United is automatically reassigning seats on its planes to separate passengers. These are good steps, but they only work well if a flight has lots of open seats. And if demand on a route is uneven — more passengers wanting to go in one direction than the other — it may be necessary to operate nearly empty in the less popular direction to stay sufficiently un-crowded in the more popular one.

There are also regulatory issues. The CARES Act grants that will give airlines money to meet their payroll come with terms that require those airlines to maintain service to virtually everywhere they were already serving. The intent here is sensible: Some travel is essential and it’s important that people who truly need to travel by air retain a way to do it. But in some cases it appears to be leading to an excessive level of service, where even small destinations that previously had service from several airlines continue to get multiple flights a day.

One solution the airlines are advocating is allowing them to codeshare, with all the carriers still selling tickets to every city they used to serve but often putting the passengers with those tickets on a competitor’s aircraft. The Department of Transportation also has the power to waive the requirement to maintain service everywhere, and it seems to me they should do so with some small airports that aren’t far from larger ones: Is airline service to Monterey, California, really an essential travel link when passengers can drive just over an hour to the airport in San Jose? It’s not like there’s traffic.

Leff, who blogs at View From the Wing, pointed out to me some other reasons that airlines have cut schedules more slowly than passenger demand has fallen. Airlines have committed in advance to schedules, and changing those schedules requires some advance planning to ensure aircraft and crews end up in the right places and those passengers that do want to fly can be reaccommodated. In some cases, airlines have been dealing with the near-term crash in demand by canceling scheduled flights rather than formally taking them off the schedule, so you should not assume that all 13 of tomorrow’s scheduled Washington-Boston flights will actually fly. The airlines have announced additional schedule cuts for later this month and next month, so available seats may move closer into line with demand over that time, necessitating fewer cancelations.

And while airlines will reduce their extensive cash burn as they implement additional schedule reductions, the reduction may not be as much as you would expect. The airlines have ongoing commitments to pay employees — commitments that are strengthened under the terms of those CARES Act grants. They also have ongoing commitments to pay airports to lease gate space and to pay the companies that own or finance their aircraft. The biggest variable cost of flying, fuel, has come down because crude oil prices have fallen so much due to the crisis. And parking a plane has costs of its own and is more complicated than just leaving an aircraft wherever it is. The Wall Street Journal noted this weekend that Lufthansa Group has been having trouble sourcing the chemical it needs to put in planes’ fuel tanks to stop algae from growing in them while they don’t fly.

Airlines were not really built, financially or operationally, to sustain a huge and lengthy shutdown. Like a lot of institutions, they are lumbering into the changes that will be necessary here for an indefinite period. You can expect more near-empty flights along the way.

Daily news about the politics, business, and technology shaping our world.

By submitting your email, you agree to our Terms and Privacy Notice and to receive email correspondence from us.